TestNG offers inbuilt reports of the test execution. The built-in reports, despite being carrying information about the executed test cases, more information and readability are required to share this with stakeholders. Additionally, an Extent report is a customized HTML-based report integrated with Selenium using the TestNG framework. Moreover, the Extent report offers numerous advantages concerning the built-in default report of TestNG, such as visually appealing pie charts, step-wise details, screenshots, etc. It all comes in a neat and presentable UI that is easy to share with other project stakeholders.

Subsequently, in this article, we will learn how to generate an Extent report with Cucumber using the ExtentReport Plugin for Cucumber. We will use the  "grasshopper" plugin to produce the Extent report for cucumber.

What is the Extent Report?

Extent Report is an open-source reporting library used to create visually attractive reports for Selenium tests using JUnit and TestNG. Extent reports produce HTML-based documents that offer several advantages like pie charts, graphs, screenshots addition, and test summary. Additionally, we can easily share the generated report with stakeholders via mails. It presents several different functionalities over the in-built default report. Conclusively, it's one of the most used reporting libraries for Selenium tests due to all these features.

Can we use the Extent Report with Cucumber?

Can we use the Extent Report with TestNG?

How to integrate the Extent Reports in a Cucumber-TestNG project?

Reading through all the topics mentioned above, we now know that it's possible to add an Extent Report to our cucumber TestNG framework. Subsequently, let's look at the steps to integrate the Extent report with the Cucumber TestNG project.

Before we could proceed with the Extent report plugin's configuration with the cucumber project, we need to add few dependencies. Using maven allows us to mention the dependencies in the pom.xml file instead of downloading separate libraries and adding them to the project. Consequently, let's add the following dependencies to our project.

Add Cucumber and TestNG dependencies to the project:

The dependencies defined above are the necessary dependencies that are required to create a Cucumber TestNG project. Let's add these to our pom.xml file.

Note: To work with extent report 5, you will need to add your pom's latest available version. For earlier versions like Extent Report 4, please use version 1.2.

Let's add these dependencies to our pom.xml file.

By adding these dependencies, we have added all the required libraries to our project. The next step will be to configure and generate the report.

How to generate the Extent Report in a Cucumber TestNG Project?

After adding all the required libraries, we need to make few configuration changes to start using the Extent report. Let's follow few simple steps to configure our project. Consequently, we will begin by adding the Extent report properties file to the project. 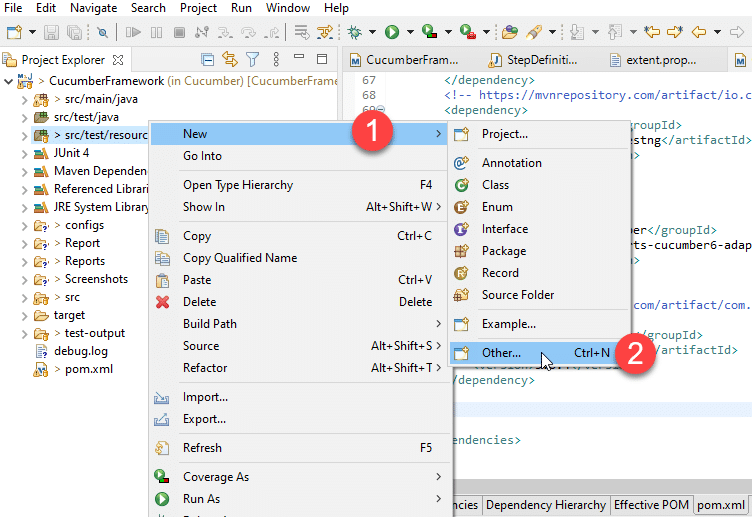 The wizard search for File and select File from the search result as marked in the arrow's below image. After selection, click on the Next button. 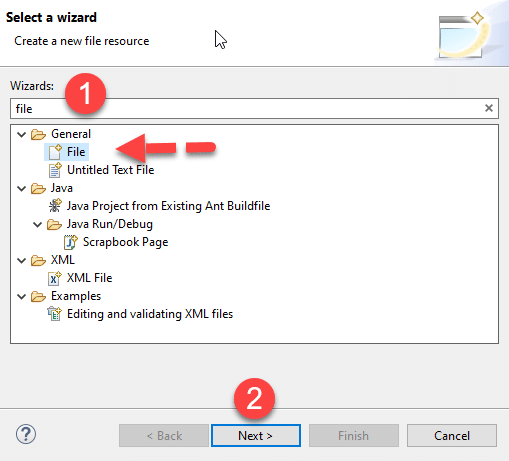 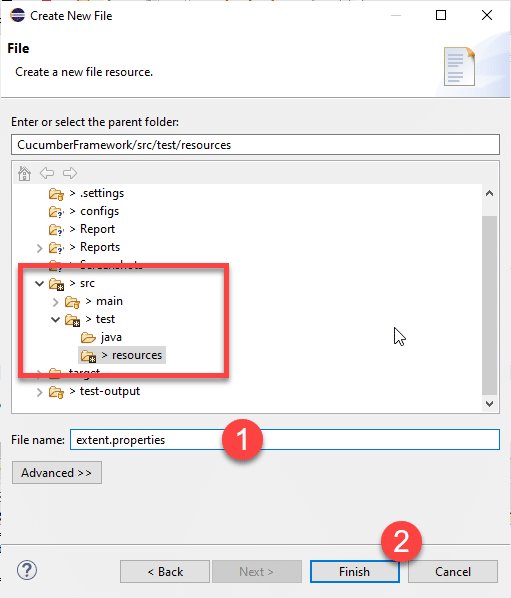 Let's add the following information to the properties file:

As you can see in the image below, we have created an extent.properties file in the src/test/resources folder. We can use this file to add all required properties for the Extent report. Here we are putting generate and store reports at a given location.

Here we are putting sets to generate and store reports at a given location. You can provide any location where you want your reports.

Let's navigate to our Runner class and add the above text to the plugin. Be sure to keep the colon ": " at the end, as mentioned. Subsequently, after adding to our project, this is how your runner class should look:

Make sure that you have made the correct import for the CucumberOption. If you accidentally imported JUnit CucumberOption instead of TestNG, your tests will not get recognition.

Step 3: Run Cucumber Test with TestNG to generate Extent Report - With all the setup and configuration completed. Let's execute a few simple end-to-end cucumber tests to validate the working of our extent report plugin.

Our sample feature file with two scenarios looks like below.

Our runner file with the plugin for extent report added will be something like this:

With all our files in place, we can now execute feature files to generate reports. We have one feature file with two scenarios added to it. We will be using our DemoQA website for this example.

Run as TestNG test - To execute our feature file, we need first to navigate our Runner class. Right-click inside the Runner class and then select "Run As". From the menu, select "TestNG test" ,as shown in the image below. It will start our execution.

Note: This "Run As" >> "TestNG test" option will only appear if you have installed TestNG as a plugin in Eclipse. To install the same please see How to Install TestNG in Eclipse or IntelliJ? 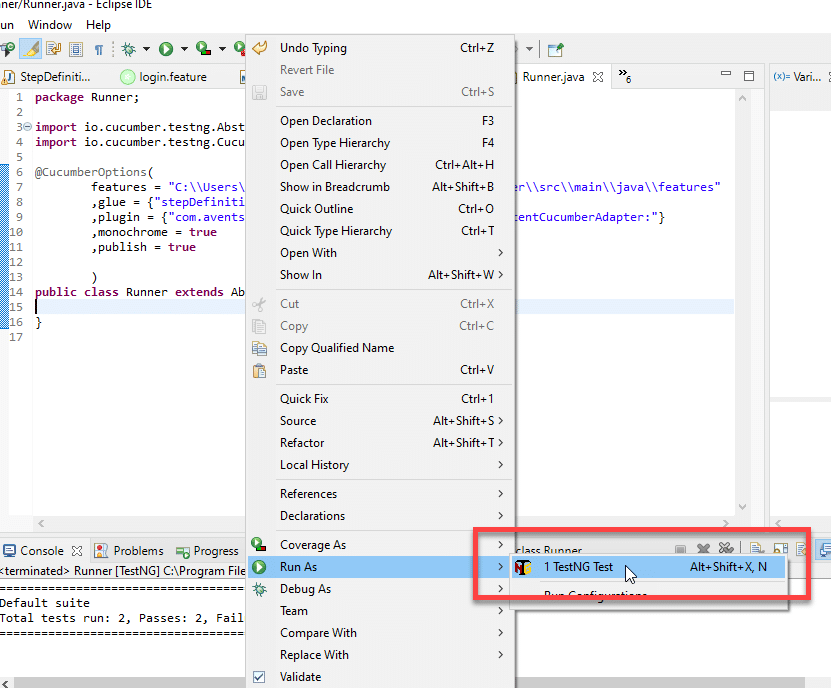 The plugin will generate a file named Spark.html as defined in the properties file. We can now navigate and validate if we can generate the report. In the image below, we can see that a report develops by the name of Spark.html.

Now, we will open the file to view the details that we captured. As shown from the below image, point 1 denotes the feature, and 2 represents the Scenarios inside the feature.

We can click on the scenarios to expand it to view the step details. 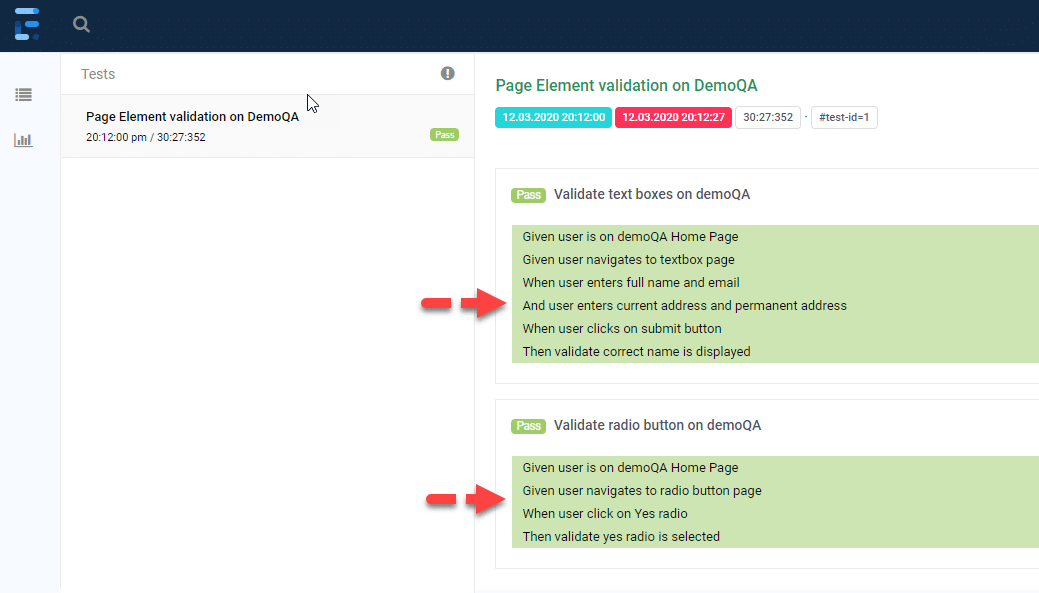 The Extent report also has an overview section with the details of the execution. It will contain details like pass/fail pie chart, start time, end time, date, etc., as shown in the image below.

It concludes the generation of extent report with Cucumber TestNG.

Apart from the nice readable report, the Extent report also offers features to customize the report as per requirement. Let's have a look at some of the customizations on offer.

How to customize the report folder name?

Previously we have learned ways to generate an Extent report with Cucumber TestNG. But the previous approach generates reports by overriding the existing reports with new reports. Usually, we need to maintain a backup of all the test execution results. To do this, either we need to save each report with a unique name or create a folder with a unique name. Let's learn how to achieve this.

It is quite easy with an Extent report adapter. We need to add two new settings to the extent.properties file:

The value that we provide to these settings will merge to create the folder name. The value for the basefolder.datetimepattern should be a valid date-time format. (refer to oracle formatter pattern for a different format and other details).

To add this, go to the extent.properties file and add both the settings as shown below.

Now, let's run the report and see if all the folders and reports create. As can be seen from the below image folder has been created with date and time.

As seen in the image below, the "Reports" folder gets created inside the new folder.

If we look inside the folder, we can see that the report generates.

Now, whenever we execute the features, a unique folder will generate for each run. It will help in keeping track of all the execution results.

How to add screenshots to scenario steps?

We require Screenshots to help QA in analyzing steps and understand the execution result. A screenshot offers much-needed analysis capability to the users and better understand in the event of a failure. With an Extent report adapter, it's relatively easy to add a report to the project. Subsequently, let's see how we can use this.

Let's add the following method to Hooks class or in any class you have defined your Hooks scenarios.

In the above example, inside the addScreenshot method, we are accepting a Scenario type object. The Scenario is present inside the io.cucumber. Inside the method, we have used the common screenshot feature from Selenium. Then we want to read the file as byte[] type, as a scenario.attach method accepts byte[] type object as a parameter. Additionally, Scenario.attach attaches the screenshot with each step of the scenario.

Let's execute the tests to see if screenshots are present in the scenario steps. Consequently, the output folder will contain all the details.

As shown in the image below, a screenshot folder generates along with a reports folder.

Now, let's navigate to the Reports folder to view the report. As we can see in the image below, the report generates.

Let's open the report and view the report. As you can see, besides the scenario,  an attachment sign is available, which means something attaches to the scenario.

We can now expand the scenario to view the step details, as shown in the image below. Each step now contains a screenshot of the step. 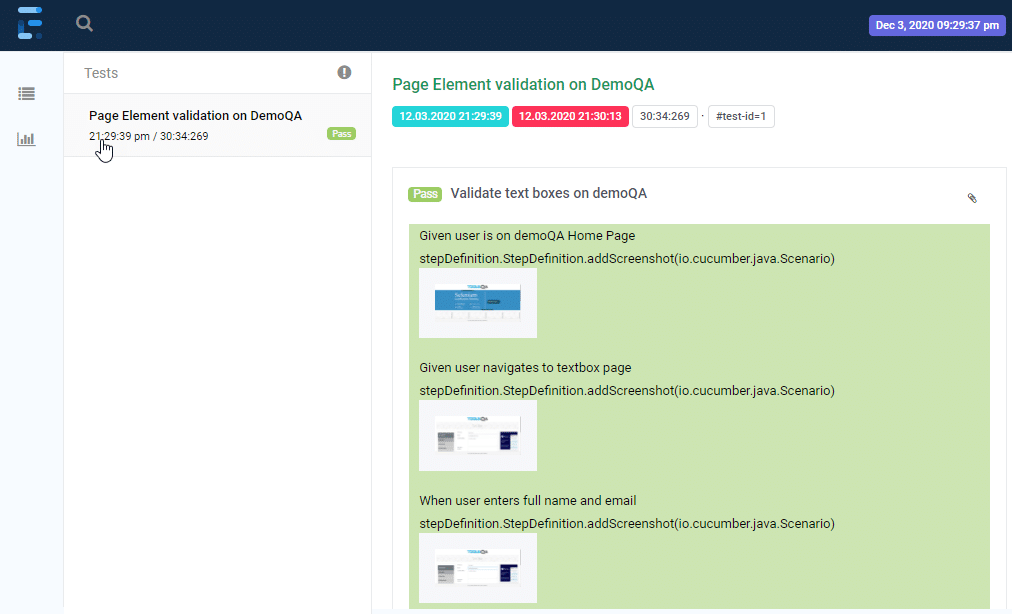 How to add screenshots only for failed scenario steps?

In the previous section, we learned how we can add screenshots to each scenario step of the extent report. But sometimes we may need to capture screenshots just for the failed steps.

In this section, we will discuss how we can attach screenshots only for failed steps. Let's have a look at the @AfterStep annotation we added in the previous step.

This will give us the following code snippet:

To check this code let's simulate a fail condition. We can do it using an assert true statement and passing a false value to it anywhere in our step definition. For example, we added the following code to our last step in the step definition file i.e. the step that we want to fail.

Let's run the scenarios from the TestRunner file using TestNG and see the results.

In the generated report folder:

As we can see in the above image, the report and the screenshot folders have been generated. If we navigate to the "Screenshot" folder, we will be able to view all the failed scenario screenshots.

As we have only one failed step, so only one screenshot has been captured as seen in the above image. Now, let's navigate to the reports folder and open the generated report.