Extreme programming is one of the Agile methods. It is different as it is

& most importantly, it’s an exciting and fun way to develop software.

What is eXtreme Programming?

As per Wikipedia - Extreme programming (XP) is a Software Development Methodology which is intended to improve software quality and responsiveness to changing customer requirements. As a type of agile software development, it advocates frequent "releases" in short development cycles, which is intended to improve productivity and introduce checkpoints at which new customer requirements can be adopted.

Why is it called “Extreme?”

Because it increases efficiency and likewise ensures the application of principles and values in an extremely effective manner. It is done by

The below figure shows us how the typical software development phases and values, have been pushed to their extreme level in this method of development. 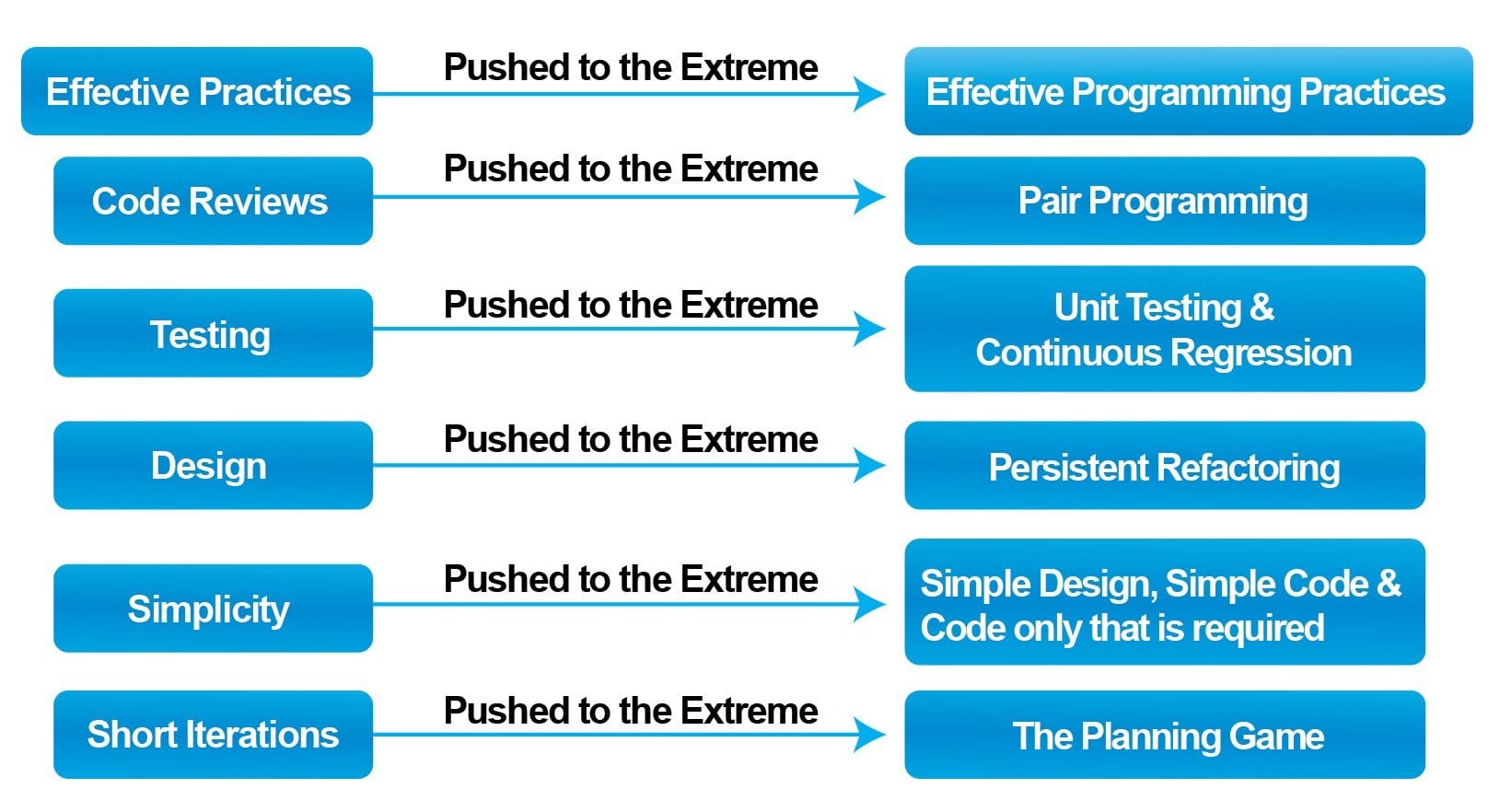 Kent Beck originally defined extreme Programming (XP) in 1996; however, its second version had an explanation of the principles, which got released in 1999. The main focus of extreme programming is customer satisfaction, and their development teams achieve it by organizing itself. They develop features when the customer needs them. In addition to that, Extreme programming takes the best practices of the development process to an extreme level. In today's rapidly changing market, it uses the iteration method to adapt to the new requirements quickly. It’s a highly disciplined way of continually delivering high-quality software faster. Moreover, the customer is actively involved with the team to perform continued planning, testing, and rapid feedback to provide working software frequently.

XP is one of the most popular methods. It is lightweight because

When to use Extreme Programming:

There are five values of Extreme programming

For instance, let's say in a restaurant if a customer tells the waiter specifically that he wants his dish to be

But the waiter tells the chef to make the dish less spicy. After that, when the meal arrives, it gets rejected by the customer, the reason being; it had oil and the usual amount of salt too. And the chef had to cook it again. All because there was no proper communication between the waiter and the chef.

We need to start developing the most straightforward features first, and then later, we should move to the problematic and extra functionalities. It should be simple, and we should work on the need at the moment. In addition to the above, we must not worry about future requirements and should not make it complicated, assuming that this feature might be needed later. The developers and testers will easily understand simple code and design.

For instance, when the chef has multiple orders, then he always starts with whatever he finds comfortable and is confident that he can cook well.

*Like, during exams, we were always suggested by our seniors to start with whatever is the simplest. *

Continuous feedback helps you understand how great you are doing. It works as a catalyst for the project. In extreme programming, feedback can come from different sources like

For instance, developers are like chefs in a restaurant. They should be ready to accept feedback from all the sources in the same vein as a chef can get feedback from the customer, his senior chef, the waiter, or the management.

For instance, in a restaurant, the chef is responsible for deciding the ingredients, the time of cooking, and the spice. It is the kind of faith that the team shows in the chef and gives him the courage to make his own decisions.

In Extreme programming, everyone respects each other.

For example, in a restaurant, everyone has their specific roles and other values. A chef will respect and value whatever the waiter says; the chef will never go back and check with the customer if the waiter is right or not? Similarly, the waiter, while serving, will never ask the chef about the dish. The waiter will respect the chef's experience and skill. 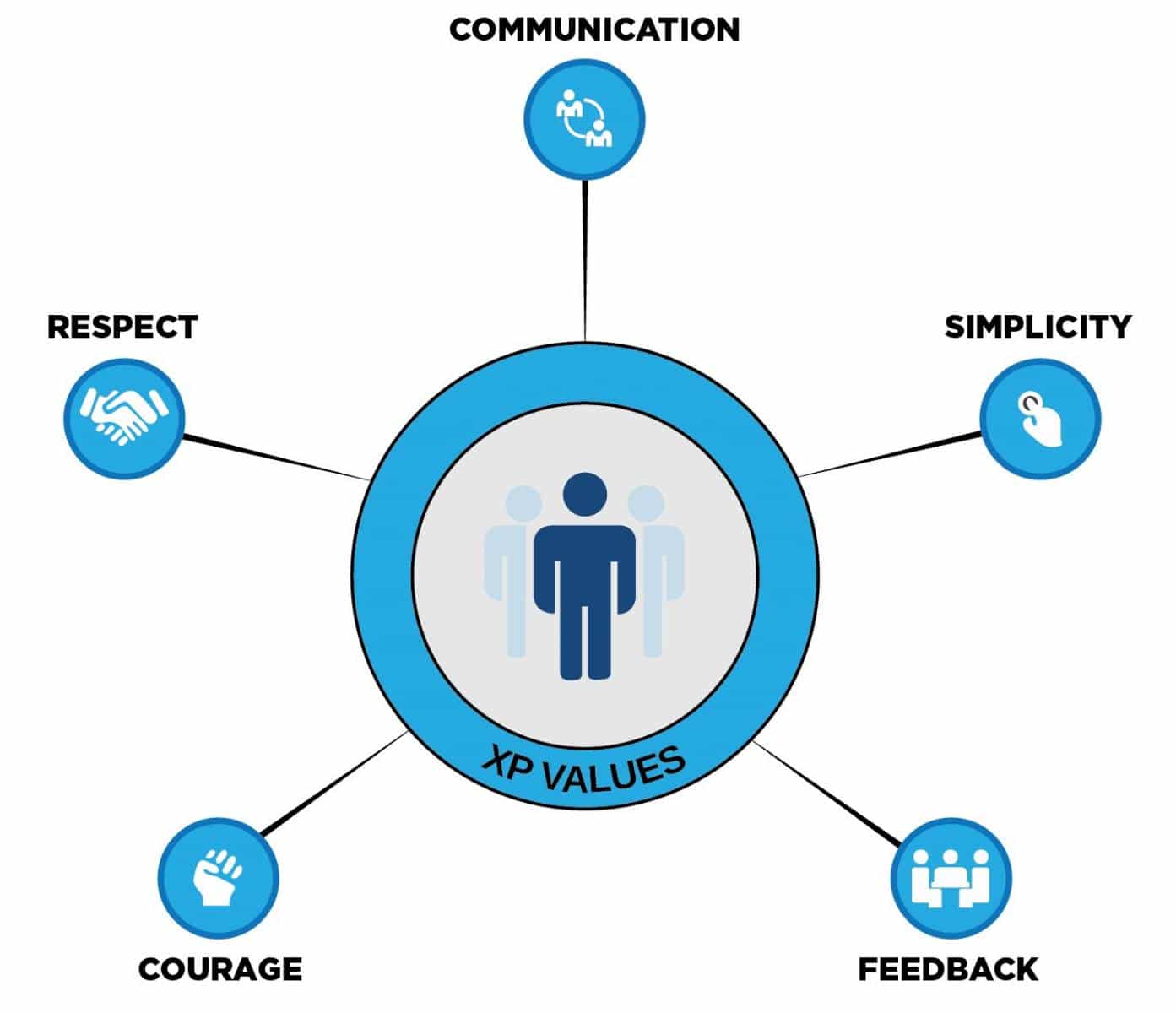 The below principles get applied during the entire procedure of Extreme Programming:-

Rapid feedback means the time between receiving feedback and implementing it in the system should be minimal.

This principle suggests that the developers should try to handle every problem with simplicity like,

It is the approach that talks about adopting and considering most of the changes, while the actual problem is getting solved simultaneously. Therefore, embracing change talks about

Providing the best quality product is the main motive. To clarify, the team needs to

There were 24 practices of XP, which were later drilled down by Kent Beck to primary 12 practices:

The four areas into which the practices of Extreme Programming fall are:

The above figure shows the application of the practices in Extreme programming. It shows

Two major artifacts in XP are-

Other important Extreme Programming artifacts are as follows −

A User Story is nothing but the document that describes the user’s requirement. The structures of User Story cards have the following features-

A Task Card is created by the Development team to implement the task in an organized manner. It will have the following task details against a particular user story-

Performance of acceptance tests happens to ensure that all the User stories are appropriately understood and implemented. The team of testers does these tests.

There are two phases, where task evaluation, time estimation, and effort estimation happens.

Below are the Two Phases of Estimation and their planning-

After designing, the developer does the coding, followed by unit testing.

For unit testing –the Unit test case is prepared by the developer to make sure that the particular feature (unit) is working as expected. The unit test is a developer written test for any specific functionality. Moreover, the Unit test case leads to coding and unit testing for any task. To sum up, it is the very first step in the level of testing and done before Integration testing.

All the activities are basis the Stories.

So, both stories are documented based on the communication between customers and developers or within the team.

What are the different activities of Extreme Programming?

There are four primary activities of Extreme programming. They are: 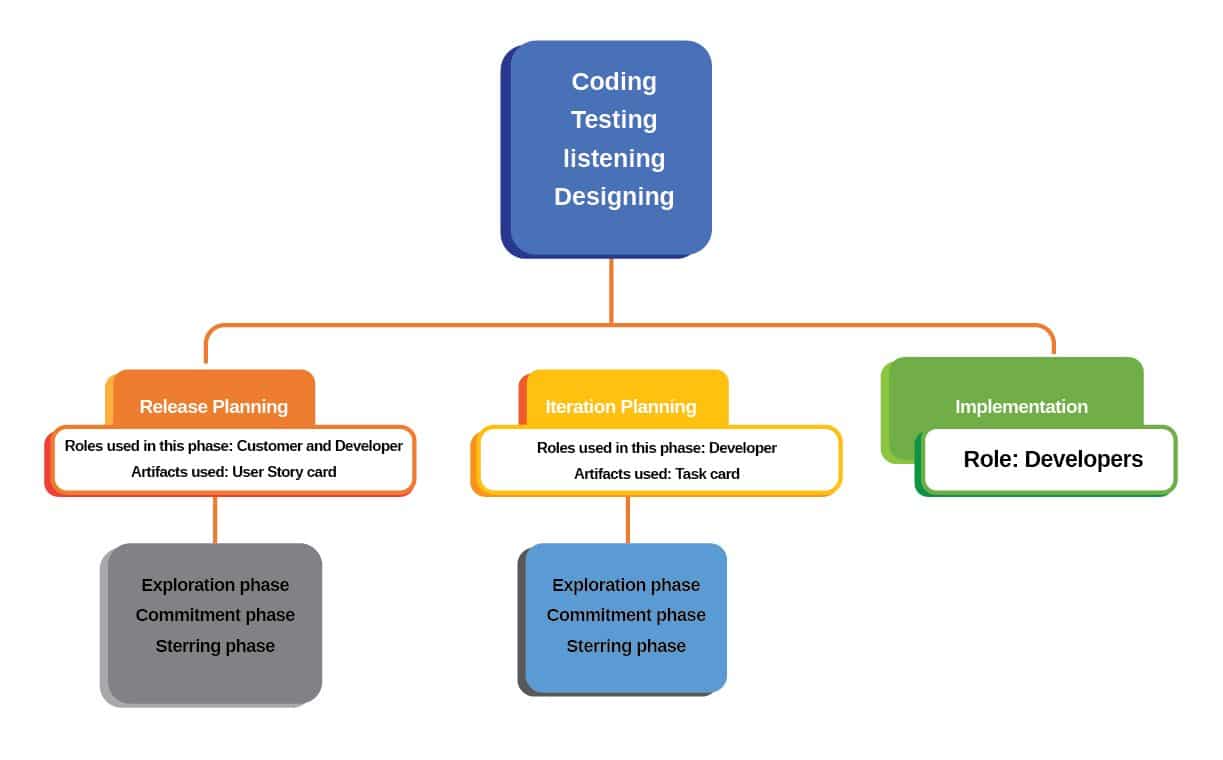 Before coding, it is all about collecting the requirements and designing as per requirement. However, once the design and testing happen, coding starts.

A team of developers or programmers will do coding.

Testing is of two types, namely, Manual and Automated. Here in this method, manual testing gets done.

The team of testers performs manual testing, and subsequently, test results will be published.

How would the developer know what is to be coded by him and tested by the tester? Listening enables you to understand your job.

Tester and developers are a critical part of the system. Therefore, both have to be an active listener to understand the current progress and the next steps.

In this phase, we plan for the next release. The user stories and the subsequent release date design this. Release planning will be done by the customer and developers mutually in three phases.

Firstly, the Exploration phase is the phase of gathering requirement and finding out the impact of that requirement on the project and thereupon framing them to a user story. Following are the steps for that:

Customers face some issues and approach the developer with a problem and explain their question to the developer*.

Important: Active Listening is crucial in this phase so as to:

The second phase is known as the commitment phase because this phase involves the resolution of:

The customer and developer will sort it out based on four components:

Important: Active listening is essential here as well because of the following reasons−

Finally, the Steering phase comes, which is also known as a phase of change. The requirements of any new changes happen in this phase.  In other words, everything happens in this phase, like adding a new feature, removing or changing an existing feature, etc.

In Steering phase, the customer can ask the developer to "steer" the process −

Important: Like every phase, Active listening is essential in this phase too. It's important to:

In this phase, there is no customer involvement. That is to say; the developers will be planning the activities and tasks for iteration.

In the Exploration phase,

In the Commitment phase,

In the Steering phase,

The implementation happens during the steering phase of iteration. The activities that come under this are-

In Extreme programming, three roles are very critical and vital. Likewise, there are other roles, too, but they work under them. These major roles are-

The customer is the one who decides and conveys the entire requirement. In Extreme programming, the customer has to be in continuous touch with developers. Additionally, the customer can be

Customer will be responsible for the following-

Developer or programmer should be an effective communicator because he is the only channel of communication between the development team, testing team, and customer. A developer will be the one with the rights to do the following-

Major responsibilities of a programmer are

Responsibilities of a Coach include-

Some other roles are:

The tester will be the one who will be doing testing after coding. Responsibilities of a tester include -

The tracker will be the person who will ensure that everyone is doing their work correctly, including the developer. Responsibilities of a Tracker include -

As the name suggests, doomsayer will be the one who will be keeping an eye on any disaster. These disasters can be like not meeting timelines, a bug due to some small mistake, infrastructural issues, or something that can impact the project in any manner. In other words, doomsayer will try that nothing goes wrong. Doomsayer’s responsibilities include:

The Manager is the one who will be passing the reports and trackers for process progress. He will be answerable to the Gold owner in case of any issues (The Gold owner is someone who will be funding the project from the customer’s side). Responsibilities of a manager are as follows-

These 6 phases are as follows:

Differences between Extreme Programming and Scrum

Why Extreme may fail-

To conclude, Extreme programming is an agile software development framework. It improves software quality and responsiveness to the ever-changing requirements of the customer. Additionally, it favors frequent "releases" to improve productivity.