Feature Driven Development (FDD)- As the name says, the feature would be the most crucial aspect of this process. The practices this method follows might not be new. However, their blend is. In addition to the above, this method finds a solution to significant and challenging problems.

What is Feature Driven Development (FDD)?

Feature Driven Development (FDD) is an Agile framework that focuses on features. It's a framework which

The Values of a framework are the values that make that framework different from others. There are a few values that are important and affect all the aspects.

There is a story behind the development of FDD. In 1997, Jeff De Luca was the project manager for a Bank in Singapore for a considerably large scale and very critical project. While working on that project, Jeff stuck on exceptionally complex problems. Despite using all the techniques available, the question remained as is.

Finally, Jeff hired Coad, who was a developer. As a result, they both came up with a method which was called Feature Driven Development. They took help from 50 other programmers and delivered 2000 functioning features in 15 months.

The first publication of this method happened in 1999 in a book called “Java Modeling in Color with UML”.

Any project can use this method. In other words, that project splits into multiple features; each feature is divided further until it is as small as it can be worked out. Additionally, this is done to ensure that its delivery can happen in 2-10 days.

It is usually applicable to Large-scale projects.

The people related to the project are the most crucial part of the system. Below are the six essential roles in Feature Driven Development (FDD):

Project Manager is responsible for sharing progress reports with the client and ensuring that the project is progressing as required. In addition to this, one project manager can manage more than one project. Project Manager's responsibilities include:

An Architect is the one who designs the system, and the chief architect handles a team of Architects. In a small scale project, it can be one person as well.

The Chief Architects are responsible for the following things:

Development Manager is the one who handles the team of developers and ensures that they finish their job on time. They may handle more than one project or team at a time.

A development Manager takes care of the following things:

Class is the smallest set of feature development which develops in a maximum of two weeks.

The Class Owners are the developers who create features. In addition to this, they take guidance from the Chief programmer and send progress reports to the Development Manager.

The domain expert can be anyone who has the best knowledge of that particular domain and can help Teams to gain an understanding of it. For example, in school, we have different teachers for different subjects, and not one teacher can teach all the subjects. In that case, every subject is a domain, and the subject teacher is a domain expert.

Other than these six significant roles, many supporting roles exist on a case to case basis.

The designing of FDD happened when the rest of the frameworks were not working for Jeff. This framework is a combination of best practices from other software development frameworks.

We need to understand a few terms like what is a feature and how do we develop by feature before understanding the practices followed in FDD.

In Feature Driven Development (FDD), a feature can be developed and delivered to the customer within one or two weeks, depending on the team size and feature complexity.

To make it more clear, let’s consider MS office as software that the customer wants. Now in MS office, the client would wish to have:

Any function that is difficult to develop and not deliverable in this short span (2 weeks) further divides into smaller functions. This process goes on until the function is not small enough to be delivered in a maximum of 2 weeks.

To sum up, since we know what the functions and features are, let's talk about the Practices FDD follows.

These best practices are as follows-

Since we already discussed the classes that we are going to use, and also the interaction between these classes, it becomes effortless for developers to follow this structure.

The best technique for Domain Object modeling is modeling in color. Which, in turn, means that different colors represent different classes. Additionally, their categorization happens as per the requirements.

UML is a set of four colors and is called the Unified Modeling Language diagram.

Peter Coad suggested these colors first. The classes divide into different categories, and each class has its color.

For example: Let’s consider the case of a yoga center. The performance of multiple tasks happens there. 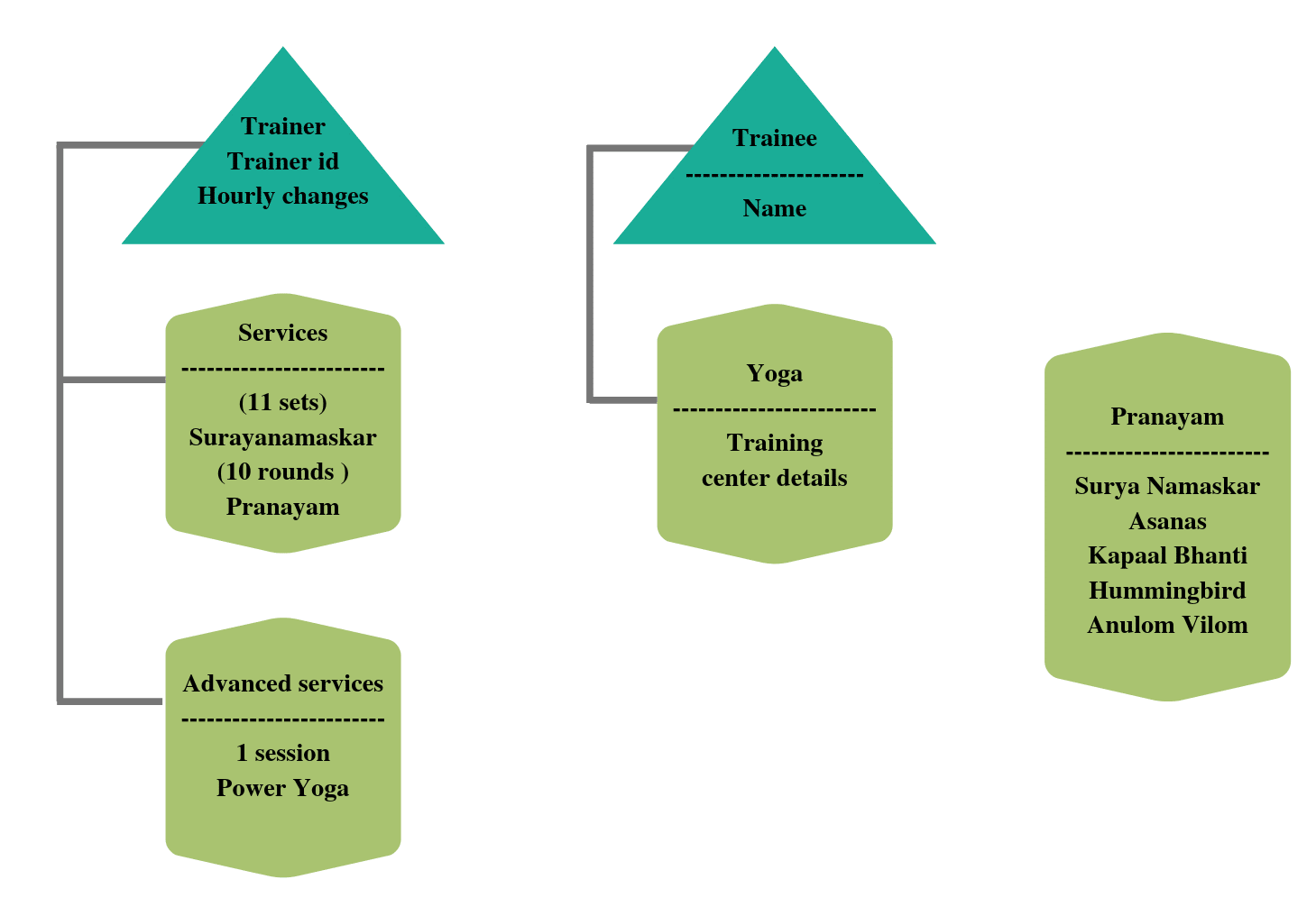 All the services (Exercises) will have time or rounds (Reps) assigned to them. Therefore, they are there in the Pink category.

Yoga is a party(service provider), so it is green in color. It also includes its unique attributes like registration number, head office location, and center head.

A person can be either a trainer or a trainee. Therefore, the yellow color represents them both.

Below is the format we use to define this UML diagram

Feature Driven Development (FDD) focuses on features. This method ensures the fast delivery of the correct feature to the customer. Additionally, the decomposition of a significant function takes place, whose delivery & design are not possible to finish within two weeks. It happens until it is deliverable in a maximum of two weeks.

As a result, a feature team remains small because the feature size is small.

Every member of the Feature team contributes to the design and development of a feature. This team will be working under one experienced developer. As a result, this reduces the risk and helps a Class Owner in development.

One Class Owner may be a member of multiple Feature teams at the same time.

Chief Programmers are also Class Owners, and they are also a part of the Feature team which is led by some other Chief Member. The primary purpose of this is helping class owners.

Example: to calculate the total number of people developers will name the feature as below-

After the decomposition of function into small features, the assignment of one feature to one developer happens. Apart from feature ownership, we also have class ownership. Which, in turn, means that each developer is assigned a class, and that developer will be the class owner for that particular class. In addition to that, the developer will be solely responsible for the total delivery and performance of that class.

After developing any feature, it’s very crucial to check the quality. Inspections are performed to ensure the quality of design, code, and the feature. In addition to that, it ensures that it is as per the customer’s expectation. The first stage of examination is right after design, and if there are any issues, they will be sorted out by raising defects.

Configuration Management means keeping a record of the entire configuration. It maintains a history of a Class as they undergo development. As a result, they help in identifying the latest version of source code files.

Regular build ensures consistent work and implementation of the features. It is needed to be up-to-date so that the client knows the latest, accurate, and frequent progress throughout the project. In addition to the above, it ensures that the developing team always has a demonstrable system ready.

Managers need to stay in touch with the clients and maintain the visibility of project progress and their results. Additionally, the Manager controls a project by providing on-time, accurate progress reports at every stage.

Each of these processes has three essential criteria and has a template represented as ETVX, which means:

In this process, the creation of a basic Object model happens after a high-level walk-through of requirement and scope. 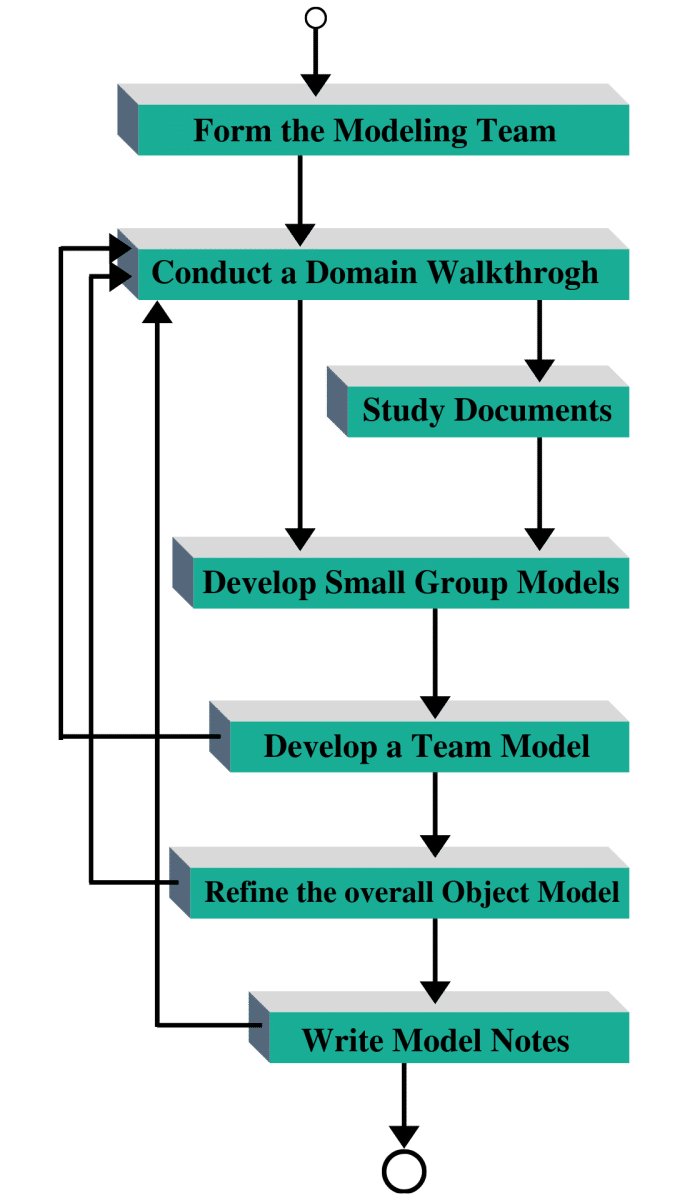 In this process, the feature decomposes into smaller sections, and the creation of the feature list for the last part happens.

Below is the template for the feature list and how is it distributed. 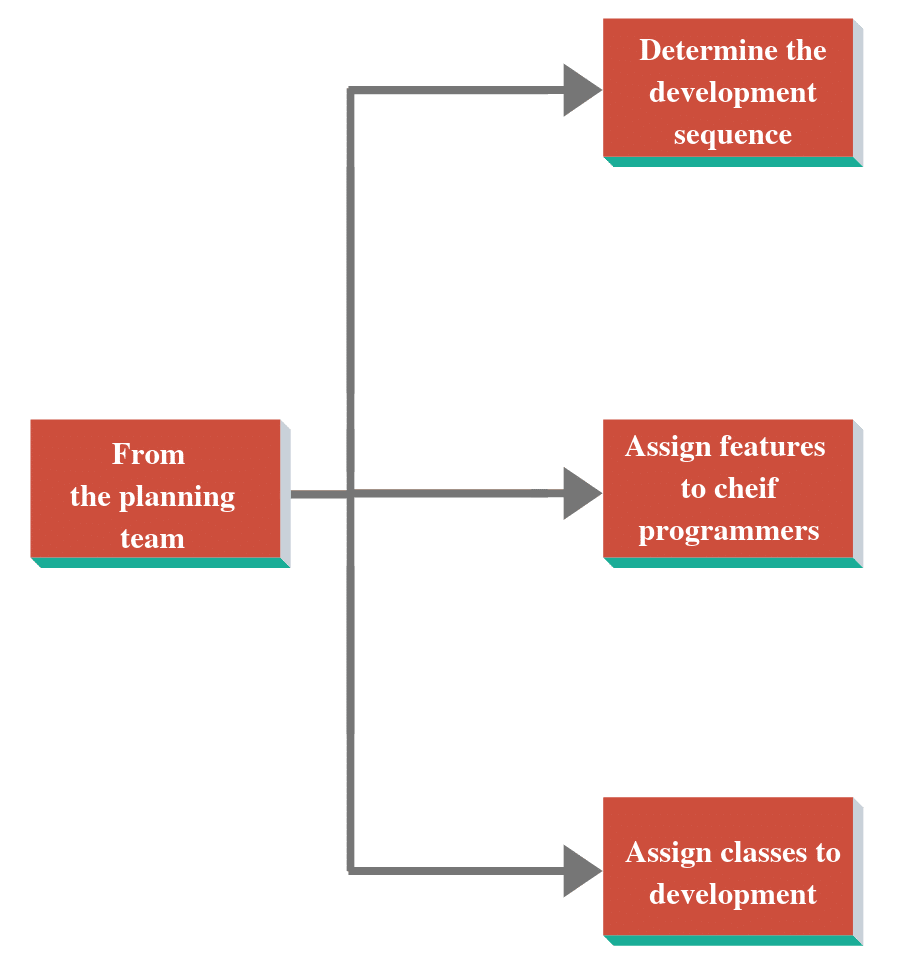 Planning an order in which the creation of the features happens in the last stage. In this stage, the chief architect will create a design for the object feature.

After the design and design inspection completion, in this process, coding will be done, followed by code integration and implementation. 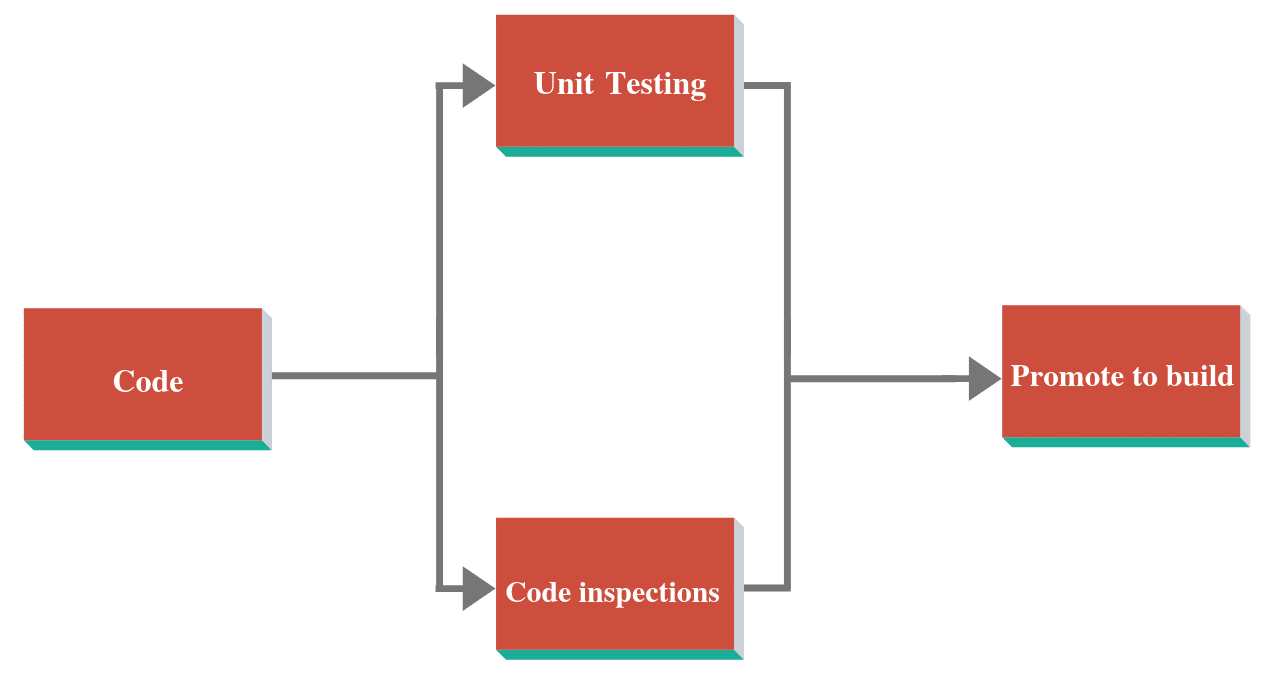 Combining all the above processes, the process workflow for FDD is

Below is the process flow diagram for the FDD model. 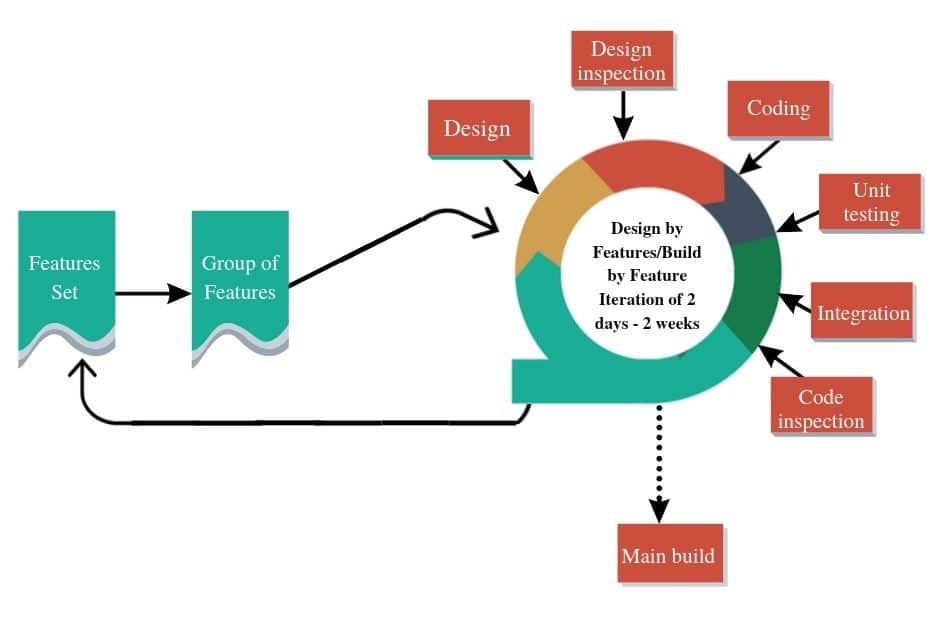 FDD has timelines assigned to perform every process. They should be spending the least of the committed time on planning and the most on designing and building by feature.

The below diagram tells us the ideal time that each process takes. 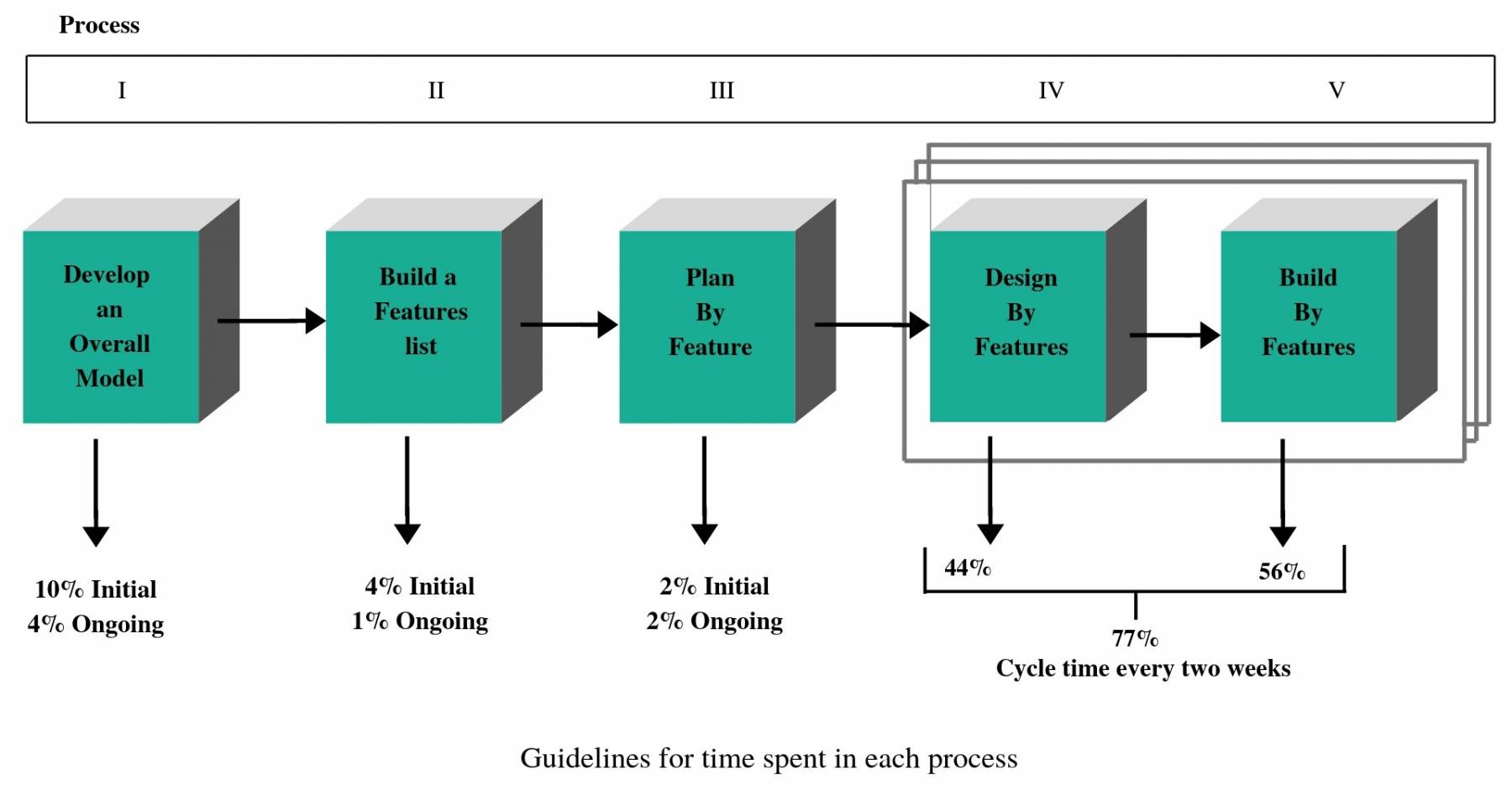 Difference between Scrum and FDD:

Now that we know about FDD, let’s have a quick look at how it differs from Scrum, which is another common Agile framework.

Advantages and Disadvantages of FDD:

There are many advantages to Feature Driven Development. Some of them are-

To conclude, Feature-driven development helps in getting better results as it follows the best practices. It is more organized and allows various teams to work parallel, which saves time. This agile framework is not as old as other frameworks, yet it has developed its safe place in today’s market, especially in large scale projects.