How to manage data in Docker?

Hence there is a need to persist data in containers. One of the best-recommended practices is the isolation of data from the container to retain the benefits of containerization. Here we keep data management distinctly separate from container lifecycle. We can implement multiple strategies to persist data or add persistence to containers that we will discuss next. These strategies are as shown in the diagram below.

As shown above, Docker provides two options for data persistence so that files are persisted even after the container stops.

Let's understand the difference between these two:

Volume vs. Bind Mount in Docker

Note: Processes not part of Docker (non-docker processes) should not modify this portion of the filesystem.

Note: If the Docker is running on Windows, we can use the named pipe.

The Docker volumes are widely used and useful tools for data persistence when working with Docker containers. Compilation of additional writable layers adds to the image size, and hence volumes are the better alternative. Secondly, the volumes are independent of the container life cycle and stored on the host. Because of this, we can back up data and share file systems between one or more containers easily.

For now, just keep in mind these methods, as the details will be shared later in the post.

How to use Mounts in Docker?

When we use bind mounts, we can control the exact mount point, a directory (typically an empty one) in the currently accessible filesystem on which additional filesystem mounts (i.e., logically attached) we want the host system. Apart from using bind mounts to persist data, it often provides additional data to containers. Using bind mounts to mount source code into the container lets us see code changes right away and respond.

The question now arises as to which mount should we use and when?

Although we should generally use volumes as far as possible, bind mounts are appropriate in the following use cases:

So discussed above are some of the cases or situations where we find bind mounts useful.

On the other hand, we can use tmpfs mounts when we do not want to persist data on the host machine and the container. It is mainly for security reasons and protects the container performance, especially when the application has to write large non-persistent data volumes.

As evident from the above discussion, we use tmpfs mounts seldomly. Nonetheless, we should keep in mind a few tips when working with bind mounts and volumes.

In the remainder of this article, we will discuss volumes in detail.

How to use data volumes?

Volumes are popular and preferred mechanisms for data persistence in Docker containers. As against bind mounts dependent on the OS and directory structure of the host machine, volumes are managed entirely by the Docker. Some of the advantages of volumes over bind mounts are as follows:

Volumes do not increase the size of the containers that are using them, and also, contents of the volume exist outside the lifecycle of that container. Hence volumes are a popular choice for persisting data. The following diagram shows volumes and mounts in action.

So if the container has to store non-persistent data that is temporary, we should ideally consider using tmpfs mount. For other things like storing data permanently or writing it into the container's writable layer, we go for volumes or bind mounts.

As to the options --mount or --v, --mount is more verbose and explicit. The main difference between --v and --mount is that the --v syntax combines all options in one field, whereas the --mount syntax separates them.

For specifying volume driver options, we should use --mount.

Now let us tabularise the main differences between --v and --mount options.

Note: Contrary to bind mounts, all the options for volumes are present for --mount as well -v flags. When we use volumes with services, only --mount is supported.

In the next section, let us go through Docker commands related to volumes.

Volumes can be created and managed outside the scope of any container. To create a docker volume, use the 'docker volume create' command on the console. The command to is given below.

We can list the existing volumes using the following command.

Given a volume, we can retrieve its details by using the "docker volume inspect command".

The following screenshot shows the working of the above commands. 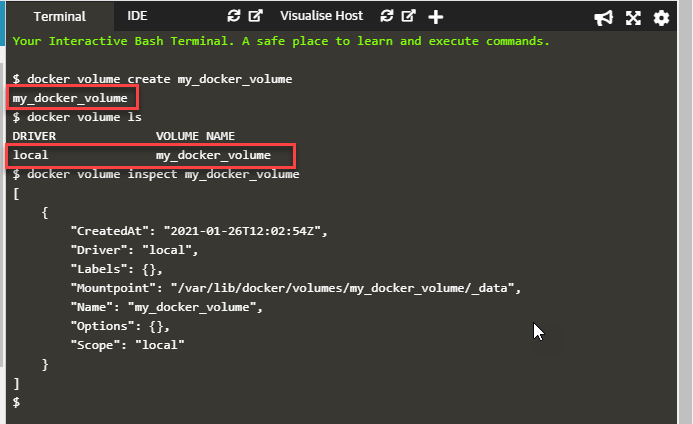 As shown in the above screenshot, we have created a new volume, "my_docker_volume" with the docker volume create command:

The next command, "docker volume ls", lists the volume just created. Next, we specify the command:

This command gives the details of the volume, as shown in the above screenshot.

Similarly, we can use the following command to remove the volume.

Hence to remove the volume created above, we can specify the command,

The result of the command is as shown below.

To verify that we indeed removed the volume, we can give the command "docker volume ls".

How to use data volume with docker-compose?

The command is as follows:

As a result of the above command, a volume with the name 'myvolume' gets created. Subsequent invocations of 'docker-compose up' will reuse this volume.

Alternatively, we can also create a volume outside of Docker Compose and then reference it inside the 'docker-compose.yaml' file, as shown in an example below.

In the above docker-compose file, we have used the volume with the name 'myvolume'. Note that a flag 'external' is specified and is set to true that indicates the volume already created outside the docker-compose.

What are read-only data volumes?

In most cases, the container only needs access to the data for reading purposes. Also, some folders may change a lot, and it might be difficult and costly to create images for each execution. In this situation, we go for read-only volumes.

To specify the volume as read-only, we append 'ro' to the -v switch as shown below:

We can also use the "mount" switch with the 'readonly' option, as shown below.

We use read-only volumes in the case of dynamic data used in the application.

When we start a container with the non-existing volume, Docker creates a new volume with the specified name. The following example shows this.

Here we give the following command.

As shown in the above command, a new container, "volumetest", is started with the specified volume name as "my_docker_volume". This volume is non-existing. On execution of the above command, we get the ID of the container volumetest. To verify that we actually created  the volume, we can give the inspect container command as follows:

When this command executes, we can directly jump to the "Mounts" section of the inspect output, as shown in the below screenshot.

As seen in the above screenshot, we have the details of the volume created. volume' and the read-write option is true for this mount. We can then stop the container and remove the volume with the following sequence of commands.

Starting the service with the local volume is similar to that of starting a container. The difference is that in the 'docker service create' command, the '-v' or '--volume' flag is not supported. Instead, we must use the '--mount' flag for mounting the volume.

How to populate a Docker data volume using a container?

As an example, we give the following command to start the ubuntu container and populate the new volume "ubuntu_vol" with the contents of the "/usr/share/ubuntu/html" directory.

After this, we can clean up the containers and volumes by executing the following sequence of commands.

Apart from this command, we can also prepopulate the volume with the command used in the previous section to start the container.

What is a Volume driver?

We can use volume drivers when we need to store volumes on remote hosts or cloud providers to encrypt the contents of volumes or add more functionality. For example, when we use the "docker volume create" command, or we start a container with a non-existing volume, we can specify the volume driver. One of the examples of the volume driver is "Vieux/sshfs". In this section, we will just touch base with the basics of volume drivers.

The first step in using the volume driver is to install the appropriate plugin. For example, we can install the plugin vieux/sshfs with the following command.

It will install the volume driver plugin on the docker host.

The next step is to use the just installed plugin to create a volume.

Start a container that creates a volume using a volume driver

After installing the plugin, we can also start a container by specifying the volume driver's non-existing volume. Docker will create a new volume while starting the container. The following example shows creating an Nginx container with the "vieux/sshfs" volume driver.

Again we can omit the password if there are shared keys, and there can be zero or more configurable options specified with 'volume-opt'. Remember to use '--mount' flag to mount the volume when the volume driver needs to pass options.

Backup, restore, migrate, or remove a data volume in Docker

We can use volumes for migrations, backups, and restores. Let us discuss these with volumes.

We follow the following steps to back up a container.

Thus we have a backup of the volume in /backup local directory. Let us take an example to illustrate these commands.

First, we create a new container with the following command:

Next, we can create a backup directory or backup the volume in the present directory itself.  Once this happens, we execute the following command to tar the volume contents.

The following screenshot shows the result of the execution of the above commands.

When we list the contents of the current directory, we can see the backup.tar file of dbdata volume created on the host machine.

Now we restore the backup (backup.tar) to this container as follows:

Once the command is successful, the container 'dbcontainer2's' data volume will have the contents of untar file into it.

We can use these techniques of backup, migration, and restore to automate the entire process.

To remove anonymous volumes automatically, we use the "-- rm" option. For example, if we have an anonymous /bkup volume. Then, when the container deletes, the Docker Engine will automatically remove the /bkup volume with the following command.

The above command creates an anonymous /bkup volume. So when we remove the container, the Docker Engine removes the /bkup volume but not the awesome volume.

To remove all the unused volumes, we can use the following command:

It removes all the volumes that are unused and frees up space.