Introduction to Docker and Docker Architecture

The last article in this series focussed on containerization and virtualization and how they are different from one another. We discussed how docker works on containers giving development and configuration powers to developers and SysAdmins. Docker enables software to work on different containers. In this article, we will begin our discussion on the Docker platform. We will discuss the Docker architecture and various components of Docker.

The following topics will be the highlights of this post:

As we know, containers are lightweight components/objects which we can use to package an application along with its dependencies, libraries, etc., and deploy it. Docker is one such container platform, and we can define it as a software platform with advanced OS virtualization using which we can create, deploy, and run applications.

Although we can create containers without Docker, Docker simplifies and accelerates the application deployment or workflow. Using Docker, we can choose the product-specific deployment environment that will contain its own set of tools and application stacks. Applications build with Docker are simpler, easier,  and safer to build, deploy, and manage containers.

The following diagram shows a typical Docker System on a Host OS. 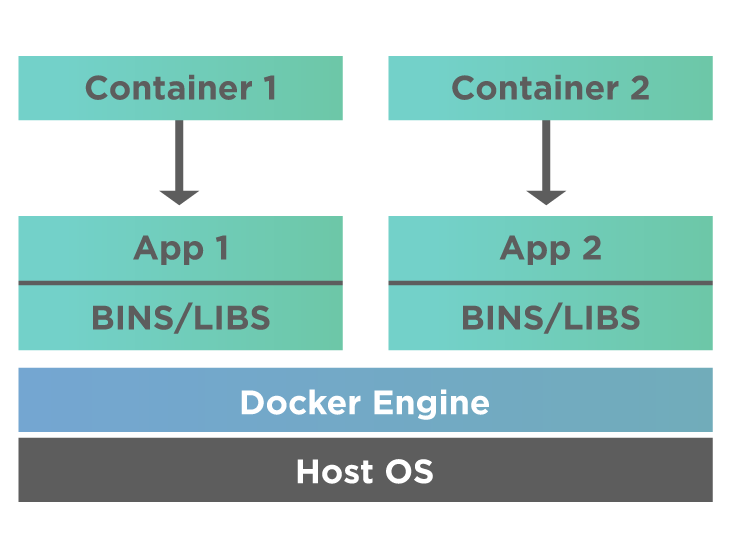 Docker containers run on top of the host system in an isolated environment. It doesn't interfere with host system hardware (unlike VMs that communicate with hardware). Hence, we can have a container with a Linux image (with the help of Hyper-V) and run on a host with Windows OS. All the apps (APP1, APP2, etc.) run as Docker containers. Each container as part of the Libs/binary contains a basic/minimum Linux operating system to manage the interdependency within the container.

We will learn more about Docker Engine later in this article.

Some of the essential features of the Docker platform are listed below:

What are the benefits of Docker?

Below given are some of the benefits of Docker.

Now let us move on to discuss Docker architecture and the Docker components workflow.

A basic Docker Architecture diagram is as shown below:

The above Docker architecture diagram shows the various components mentioned above connected to each other.

The functionality or workflow of the above docker architecture diagram is as described below. Also, let's learn in detail below about the various aspects of Docker Architecture.

The following steps are to follow when different components in the diagram above communicate with each other.

1.* A CLI (client) issues a 'build' command to the Docker Host. The Docker daemon running on Docker Host then builds an image based on the client's inputs through the command. This image then gets saved in the Docker registry. The registry can either be a local repository or a Docker Hub.* 2. Docker daemon either creates a new image or pulls an existing image from the Docker registry. 3. Finally, Daemon creates an instance of a Docker image. 4. The client then issues a "run" command. It triggers the creation of a container which then executes.

The above steps describe a simple workflow of a typical Docker ecosystem. Let us discuss each of the Docker components in more detail.

Docker Engine is the heart/ main component of the Docker system. It is open-source and used for containerization with Docker. The docker engine installs on the host. Docker Engine uses client-server technology: 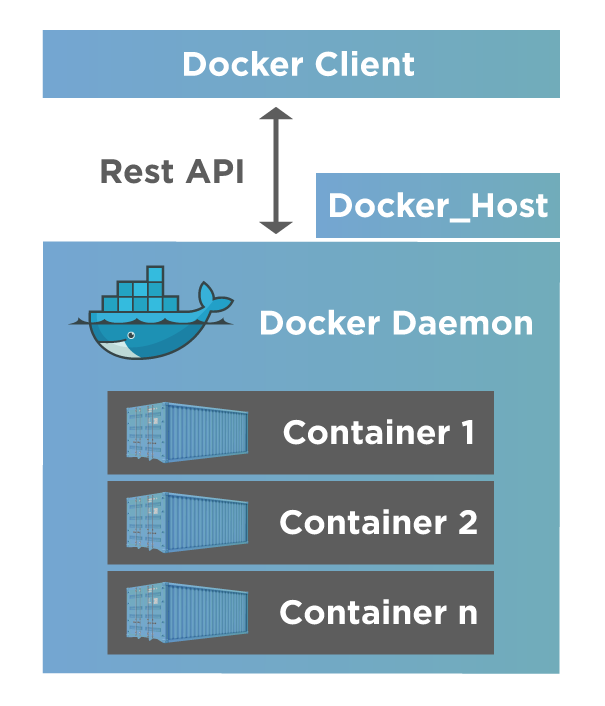 The above image shows the Docker Engine in a Linux Operating system.

Note: In the case of Windows or Mac, an additional "Toolbox" component is present inside the Docker host. Docker Toolbox is used to quickly install and set up the Docker environment on Windows or macOS. Toolbox installs all Docker components, including Docker Client, Machine, Compose(for Mac), VirtualBox, Kitematic, etc.

As we proceed with the Docker tutorial series, we will discuss these topics in detail in upcoming articles.

A Docker Image builds containers. We can view a Docker Image as a "source code" of the containers. Images have pre-installed software, they are portable, and we can even use pre-existing images instead of building a brand new one. All this makes deployment more straightforward and faster.

We will learn more about Docker images in our subsequent articles.

Docker achieves containerization through containers. If we view the Docker Image as a template, then a Docker Container is a copy of that image. So we can have multiple copies of one image, which means various containers.

Like cargo containers, we can pack the software, move it, ship it, modify, create, manage, or destroy it.

Docker Containers hold the entire package, including application code, dependencies, binaries, etc., to efficiently run an application without any interference.

Docker Registry is kind of a repository used to store Docker images. Registries can be public or private. Public registries are called "Docker Hub" and are similar to online code repositories like GitHub. We can also store images privately in Docker Hub and is accessible to millions of users.

When should we use Docker?

Since its inception, Docker has proved to be an excellent tool for developers and system administrators alike. We can use it in multiple stages of the DevOps cycle and the rapid and efficient deployment of applications.

Let us now discuss some places where we can use Docker.

Software development is prone to risks owing to unwanted situations and disasters. It can halt the development cycle and incur losses. But Docker mitigates the risk. Using Docker, we can easily replicate the functionality in case of any problems and replace it with a new platform. Alternatively, we can also roll back our development to an earlier version or revision if needed.  So a disaster-prone development environment can use Docker.

Faster And Consistent Delivery Of Applications

Docker is a portable platform and helps in faster deployment. It simply pushes the ready software into the production environment. It is easier for developers to complete all the software development stages using a Docker platform.

In a nutshell, Docker is a popular platform nowadays used for continuous integration and development.

In our subsequent tutorials, we will go into detail about each of the docker topics.