Virender Singh
Previous Lesson
Why is Testing Necessary?
Next Lesson
Defects, Root Cause Analysis and Effects

We use the software in day-to-day life, such as at home, work, banking, shopping, etc. However, at times, the software does not work as expected. For instance, website not loading correctly, an error on a bill, a delay in credit card processing, are typical examples of problems that may happen because of errors, defects, and failures in the software. Today we will discuss the common terminologies that we use when software doesn't work as expected, i.e., Error, Defect, and Failure.

Introduction to Error, Defect, and Failure

Let's try to understand the inter-relation between Error, Defect, and Failure:

It is well said by Thomas Muller “A person can make an error (mistake), which produces a defect (fault, bug) in the code, in software or a system, or a document. If the execution of the defect in code happens, the system will fail to do what it should do (or something it shouldn’t), which causes a failure”.

Let's take an example of an organization that developed a new application named "Saff Promotion System" for their annual appraisal. But employee satisfaction even after the appraisal was low. Because they considered it not up to the mark. The management, then, decided to analyze the root cause of this dissatisfaction.

Therefore, they backtracked the process and found that the software marked full day leave for the employees who reached office after 10 a.m. This was due to some coding errors. The tester also skipped these errors in coding. So, the software with this defect went to production. Which, in turn, caused a general degradation and failure of the system.

The figure below shows the interrelation between Error, Defect, and Failure. 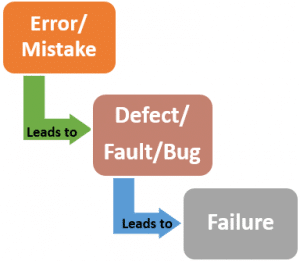 The Error is a human mistake. An Error appears not only due to the logical mistake in the code made by the developer. Anyone in the team can make mistakes during the different phases of software development. For instance,

Let us observe the basic types of errors in software testing:

A Defect is a variance between expected and actual results. An Error that the tester finds is known as Defect. A Defect in a software product reflects its inability or inefficiency to comply with the specified requirements and criteria and, subsequently, prevent the software application from performing the desired and expected work. The defect is also known as Fault.

Severity defines the degree of impact. Therefore, the severity of the defect reflects the degree or intensity of a particular defect to adversely impact a software product or its operation. Based on the severity metric, a defect falls under the following categories:

Defects also have a business perspective comparison. The rectification of some defects must happen first. Likewise, some can solve at a later stage. Just like a business where everything happens according to the current need and demand of the market. Just like the probability base, priority classification also occurs in the following ways:

Failure is a consequence of a Defect. It is the observable incorrect behavior of the system. Failure occurs when the software fails to perform in the real environment.

In other words, after the creation & execution of software code, if the system does not perform as expected, due to the occurrence of any defect; then it is termed as Failure. Not all Defects result in Failures; some remain inactive in the code, and we may never notice them. Failures also occur due to the following reasons:

Not all unexpected test results are failures:

What are the causes of Errors in Software?

Here we will discuss some possible causes of these errors.

After going through this article, I am sure you will agree with me that various problems and discrepancies encountered during the software process are interdependent and interconnected. Generally, the appearance of one leads to the introduction of another. Which, in turn, affects the functionality of the software and thus, leads to unexpected results.

Share this post:
Why is Testing Necessary?
Previous Article
Defects, Root Cause Analysis and Effects
Next Article

Error Guessing
By Faisal Khan
0
5 min read
Error guessing techniques generate test cases not captured by formal techniques. What is error guessing in software testing?
Software Development Life Cycle
By Lakshay Sharma
0
5 min read
What is Software Development Life Cycle ? What are the different stages of SDLC. Planning, Analysis, Design, Testing, Deploy & Maintanace.
ISTQB Foundation Level Syllabus 2018
By Lakshay Sharma
0
1 min read
ISTQB Foundation Level - ISQTB Tutorial for preparing Course Syllabus. Sample Exams, Questions Papers, Live Online ISTQB Exam simulator.
Software Testing Principles
By Lakshay Sharma
0
6 min read
Software testing principles have evolved over a period of time and widely accepted as the common guideline for all testing.
Risk in Software Testing
By Lakshay Sharma
0
7 min read
In this article, we are going to cover - What is Risk in Software Testing? Dimensions of Risk along with various levels of risk.
Boundary Value Analysis - A Black Box Testing Technique
By Lakshay Sharma
0
7 min read
What is Boundary Value Analysis and BVA? How to do Boundary Value Analysis with examples? What are its pitfalls and how to perform BVA?
The Psychology of Testing
By Lakshay Sharma
0
8 min read
This article covers the different Psychology of Testing and Testers and developers help to improve communication between them.
Why is Testing Necessary?
By Lakshay Sharma
0
6 min read
Why is testing necessary? We tried to decode this question which may look basic but still got lot of relevance in today's QA world
ISTQB Exam Syllabus for Preparation Material
By Lakshay Sharma
0
2 min read
ISTQB Exam Syllabus for Preparing ISTQB Cetification. Latest updated ISTQB 2018 Course Material to prepare and study for ISTQB.
Experience Based Testing
By Faisal Khan
0
5 min read
The importance of experience based testing in software testing technique cannot be ignored today. What is it and how it improves the quality?