There is chaos in testers when it comes to the difference between Smoke and Sanity testing. It is also a very frequently asked Interview Question as well. This article will give a clear idea about:

Smoke and Sanity testing very much go hand in hand with Build & Release, to better understand these, it is suggested to understand what is Build and Release and how these relate with the Smoke & Sanity Test.

What is Build in Software Testing?

In layman's term, Build is the construction of something that has a visible and tangible result. Let's try to understand this further with the help of an example.

If we are building a house, then -

This process continues until the entire completion of the whole building.

What is Release in Software Testing?

A Release is the final version of an application for customers, which is generally an outcome after multiple builds. A build, when tested and certified by the software testing team, is provided to the clients as "Release”. The Build is the part of an application while the release is a fully developed application.

Therefore, a fully developed software that is ready to be delivered to the customer after all the testing is called a Release. Also, to note that software can also have multiple releases. If any set of new functionalities or features gets added to the already produced software application, then that is also called a Release. That is why software applications have many different versions. Each version is a release.

What is Smoke testing?

Smoke tests are preliminary tests to reveal simple faults that are serious enough to reject a possible software version. These are the first tests performed in the build, and all the other types of tests follow it.

It is the process that comprises of a non-exhaustive set of tests which give confidence that the essential functions of an application/software are working fine. The outcome of this testing is used to decide if a build is stable enough to proceed with further testing because of which it is also known as Build Verification Testing.

The term "Smoke Testing" is derived from hardware testing; it is performed in the initial stage of hardware testing to verify fire or smoke is not ignited when the hardware power is turned on. 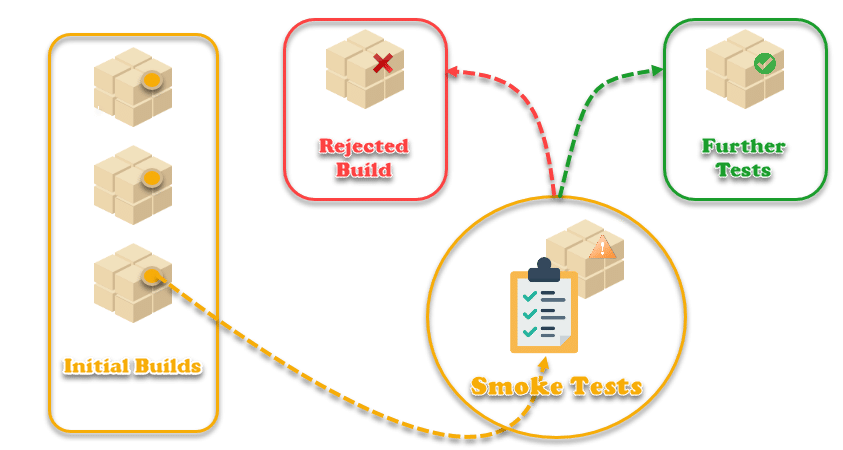 Smoke Testing is performed before accepting any build to the test environment, and generally, these are initial builds. It checks for major Priority1 (P1) issues. If the build is stable and no major P1 issues exist, testers accept the build and then perform later testing like Functional or Regression testing on the same build.

Smoke testing is carried out to find out whether significant functionalities of the system/application are working or not. If the main features break, then there is no point in carrying out further testing, thereby saving time and effort.

Let's try to understand it with the help of an example:

Assume an example - An application for booking a radio taxi

Some of the features/modules of this application can be:

Now assume the developer develops the radio taxi software version 1 / Build 1 (40% complete), checks the application at their level and the build is given to the QA to test.

As you are not able to log in so you will not be able to test most of the modules like Booking a cab or Making a Payment. Any attempt to execute test cases will be sheer wastage of time and effort. In this case, it is wise to Reject the Build.

It is a big security issue and needs reporting, but since it allows you to log in to the system and test the rest of the functionalities, so it is safe to Accept the Build.

This testing of critical features is known as Smoke Testing.

The Quality Control team usually performs smoke tests, but in certain situations, the Development team can also perform it. The development team verifies the stability of the build before sending it to QA for further testing.

Also, this testing is carried out by testers on an environment other than the test environment when the last build is ready to be deployed as a release to make sure all the P1 issues have been fixed or happy path scenarios are working positively.

When to perform Smoke testing?

The smoke test is done immediately after the implementation of the build followed by other tests such as Functional tests (to test newly added functions), Regression tests and User Acceptance tests, etc. It is preliminary testing.

What is Sanity Testing?

It is the process of testing the fixed bugs in an updated or new build. After receiving a build of the software, with small changes in the code, or functionality, the Sanity test is performed to check that the errors are corrected and no more problems occur due to these changes in the same module or feature. Let us continue with the same example of the radio taxi application to have a better understanding of Sanity testing.

In Build 7, few new features and bug fixes have been carried out in radio taxi application. Here are its details:-

QA will be retesting the particular features for which bug is fixed to ensure the given features are functioning smoothly. It is called Sanity testing.

Note: The strategy of Smoke and Sanity is used in different organizations interchangeably. Every organization uses these as per their benefits. So, in the above scenario, developer or QA can also carry out Smoke testing on all newly introduced features of Build 7 - Drivers Feedback, GPS tracking, and Deals & Offers.

Sanity testing is carried out by testers only.

Why and When to perform Sanity testing?

The purpose of this test is to determine that the proposed changes or functionality are working as expected. If the sanity test fails, the build is rejected by the testing team to save time and money. It is a subset of Monkey testing or Exploratory testing. In Monkey and Exploratory testing, random inputs are given to the system to perform specialized and in-depth testing. This testing does not follow a strictly defined process or test scripts.

A Sanity test is a narrow regression test that focuses on specific areas of functionality. This test is used to determine that the application still works right after the bug has been fixed or new feature added.

There is not any specialized technique that gets employed in Sanity testing. It is performed generally without test scripts or test cases, but manual performing of all the tests happens.

Difference between Smoke and Sanity testing

Both the terms Smoke and Sanity are used interchangeably to a great extent in the IT industry, but there are also a few critical differences between them, as explained below:

Importance in the Software Industry: