Since now we are very close to start doing Git activities, but we must know few Common Directory commands on Git Bash to make the process simple. These include

How to Change the Directory through Git Bash?

Changing the directory is important as you are always shuffling between different directories all the time while working with Git Bash. Directory is a technical term for the folder. You can change the directory in two ways:

Browse to the desired Directory through Commands in Git Bash

Note: ToolsQA is a folder inside the E drive on my system.

After this, right click anywhere in the directory => Open Git Bash here. 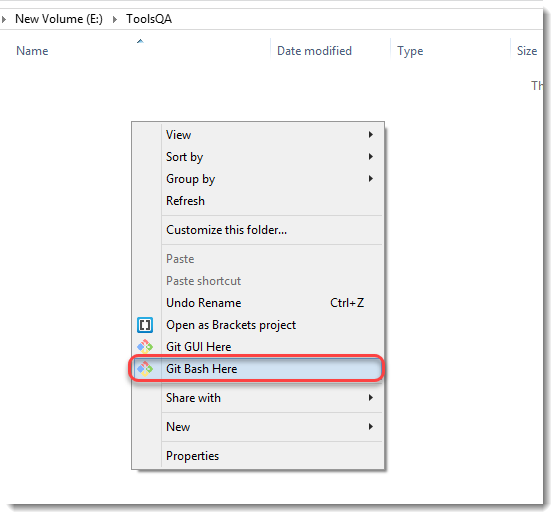 After we have learned how to change the working directory, we can create a repository in any of the project folders where we need to work. For creating a repository, we will first create a folder in which we will work

How to Create a New Directory using Git Bash?

Note: Remember that when you do not mention a more than one-word directory name in quotes, it will create two directories namely First and Project. This we will see in the next section and then delete these folders and create a single directory called First Project.

How to View all the Directories in Git Bash?

Now that we have created the folder, we must also know how to look at all the directories/folders inside our working directory.

Note: It is worth noting that ls won't show the hidden folders. You need to use ls -a for the same.

As we discussed in the above section, there are two directories created. We needed only one by the name of First Project. So for this use mkdir "First Project" command.

You can remove a directory by using rmdir command with the directory name.