In this tutorial we will learn about the Actions class in Selenium.

Most user interactions like clicking on a button, entering text in textbox can be done using the WebDriver Element Commands. For e.g. Commands like WebElement.click() and WebElement.sendKeys() are used to click on buttons and enter text in text boxes. Submitting a form can be done using the WebElement.submit() command. Even interactions with drop-down are enabled using the Select class which exposes commands like selectByValue(), deselectAll() to select and deselect options.

However, there are complex interactions like Drag-n-Drop and Double-click which cannot be done by simple WebElement commands. To handle those types of advance actions we have the Actions class in Selenium.

In this tutorial, we are going to cover Actions class and its usage.

What is Actions class in Selenium?

Let us start by taking a look at the information shown by intellisense for the Actions class. You can see this by hovering over Actions class in any IDE, a pop up menu should open up as shown below.

The user-facing API for emulating complex user gestures. Use this class rather than using the Keyboard or Mouse directly.

Implements the builder pattern: Builds a CompositeAction containing all actions specified by the method calls.

The class description clearly states that we can perform complex user interaction using the Actions class.

Actions class is a collection of individual Action that you want to perform. For e.g. we may want to perform a mouse click on an element. In this case we are looking at two different Action

Individual action mentioned above are represented by a class called Action, we will talk about it later. Collection of such Action is represented by the Actions class. 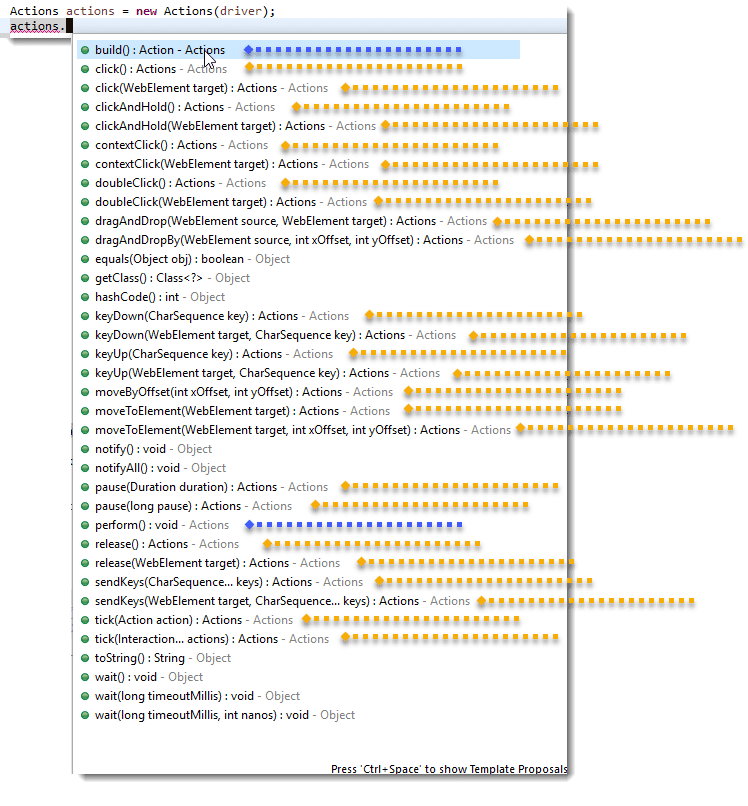 Also, an important thing to bring here is that there is one another class which is called Action Class and it is different from Actions class. Because maybe you have noticed the top blue line in the above screenshot, the build method returns Action class. But then what is Action class and how does it different with Actions Class. Let's have a look.

What is Action Class?

Did I mention Action Class, actually it is not a class but an Interface.

It is only used to represent the single user interaction to perform the series of action items build by Actions class.

What is the difference between Actions Class and Action Class in Selenium?

With the above explanations of Actions Class & Action Class, we can now conclude that Actions is a class that is based on a builder design pattern.  This is a user-facing API for emulating complex user gestures.

Whereas Action is an Interface which represents a single user-interaction action. It contains one of the most widely used methods perform().

How to Use Actions class in Selenium?

Let’s understand the working of Actions class with a simple example:

Consider the scenario where it is required to enter Upper Case letters in the text box, let’s take text box on ToolsQA's demo site http://demoqa.com/auto-complete/

Manually, it is done by pressing the Shift key and then typing the text which needs to be entered in Uppercase keeping Shift key pressed and then release the Shift key. In short Shift + Alphabet Key are pressed together.

Actions class object is needed to invoke to use its methods. So, let’s instantiate Actions class, and as the Class signature says, it needs the WebDriver object to initiate its class.

3. Generate actions sequence: Complex action is a sequence of multiple actions like in this case sequence of steps are:

A modifier key is a key that modifies the action of another key when the two are pressed together like Shift, Control & Alt.

Generate a sequence of these actions but these actions are performed on a webElement. So, let’s find the web-element and generate the sequence:

An important thing to note here is that, if you hover over any action class method, you will notice that it returns the Actions class object.

This is the beauty of the builder pattern. Which means that all actions can be clubbed together as below:

Now, build this sequence using the build() method of Actions class and get the composite action. Build method generates a composite action containing all actions so far which are ready to be performed.

Notice that the build method returns the object type of Action. It is basically representing Composite Action which we built from a sequence of multiple actions. So, the second part of the Actions class description will get clear now, i.e. Actions class implements the builder pattern i.e. it  Builds a CompositeAction containing all actions specified by the method calls.

And this is done, once the execution passes this point, you will notice the action on the browser.

In the above screenshot of Actions Class, where I highlighted all the different methods, take a look at the bottom blue line. Notice the Perform method is available in the Actions class as well. It means that it can be used directly as well without making the use of Action Interface like below:

I know you must be wondering what happened to Build step. Again, this is the charm of the builder pattern, build method is called inside the perform method automatically.

Methods in Actions class of Selenium

There are a lot of methods in this class which can be categorized into two main categories:

To see the complete list of all methods visit https://seleniumhq.github.io/selenium/docs/api/java/org/openqa/selenium/interactions/Actions.html

In the next tutorials, we will do a lot of practice using Actions Class. Please take a look at the below tutorials:

Selenium WebDriver Achitecture
By Ravinder Singh
0
15 min read
What is Selenium webdriver Architecture How does it works? Architecture & major drawbacks of Selenium webdriver with examples.
Selenium Testing
By Ravinder Singh
0
11 min read
What is Selenium testing? What are the various components of Selenium? Why is Selenium popular?What Selenium can do?What Selenium cannot do?
@CacheLookup in PageObjectModel
By Virender Singh
0
8 min read
How does @CacheLookup in PageObjectModel works? Benefits of using @CacheLookup. How to avoid stale element exception in Selenium with @CAcheLookUp
WebElement Commands
By Lakshay Sharma
0
8 min read
How to use Selenium WebDriver WebElement commands getLocation getSize getText getAttribute getCssSelector isDisplayed isEnabled isSelected
XPath Helper
By Lakshay Sharma
0
3 min read
XpathHelper Tool for Chrome Browser
FindElement And FindElements Commands in C#
By Lakshay Sharma
0
7 min read
How to use FindElement and FindElements Commands in C# Selenium How to use By.Id By.Xpath By.tagName By.linkText By.cssSelector By.className
Inspect Element In Chrome
By Shilpa Nadkarni
0
11 min read
How To Inspect Element in Chrome Developer Tools? How To Inspect Element using CSS/XPath/ String ? What's Chrome DevTools Panel?
Selenium Locators
By Anshu Ranjan
0
16 min read
What are Selenium locators?How to locate web element in DOM?What locators are supported by Selenium?How to use locators to find web elements
Dropdown in Selenium
By Gunjan Kaushik
0
15 min read
What is Select class in Selenium ?How to select a value from a dropdown in Selenium? Examples illustrating Select class usage in Selenium.
Handle Radio Button in Selenium WebDriver
By Anshu Ranjan
0
13 min read
What is Radio Button? How to select Sleenium Radio Button? How to perform validations on Radio Buttons using Selenium WebDriver?