In the current scenario, technology is going through rapid changes. We see a host of new software and lot of existing software being updated frequently. Likewise browsers which we use are also upgrading day by day. Chrome browser reached to its version 57 as of today March’17.

For better user experience, it becomes necessary to validate the application with the different combinations of browsers and also different versions of same browser. Sure, we can have the browsers installed on our box, but then we are limited because we can have only one version of a browser flavor at a given time. Also, it is not advisable to manage different versions of the same browser on a single machine.

If you're looking to run your tests on different browsers and operating system combinations but you're unable to justify using a third-party solution like Sauce Labs or Browser Stack then what do you do?

What is Selenium Grid?

The Selenium Grid is a testing tool which allows us to run our tests on different machines against different browsers. It is a part of the Selenium Suite which specialise in running multiple tests across different browsers, operating system and machines. You can connect to it with Selenium Remote by specifying the browser, browser version, and operating system you want. You specify these values through Selenium Remote's Capabilities.

There are two main elements to Selenium Grid -- a hub, and nodes.

What is a Hub?

In Selenium Grid, the hub is a computer which is the central point where we can load our tests into. Hub also acts as a server because of which it acts as a central point to control the network of Test machines. The Selenium Grid has only one hub and it is the master of the network. When a test with given DesiredCapabilities is given to Hub, the Hub searches for the node witch matches the given configuration. For example, you can say that you want to run the test on Windows 10 and on Chrome browser with verision XXX. Hub will try to find a machine in the Grid which matches the criterion and will run the test on that Machine. If there is no match, then hub returns an error. There should be only one hub in a Grid.

What is a Node?

In Selenium Grid, a node is referred to a Test Machine which opts to connect with the Hub. This test machine will be used by Hub to run tests on. A Grid network can have multiple nodes. A node is supposed to have different platforms i.e. different operating system and browsers. The node does not need the same platform for running as that of hub.

First you need to create a hub. Then you can connect (or "register") nodes to that hub. Nodes are where your tests will run, and the hub is responsible for making sure your tests end up on the right one (e.g., the machine with the operating system and browser you specified in your test).

What is the difference between Grid 1 and Grid 2?

The Selenium Grid has two versions – the older Grid 1 and the newer Grid 2.

Why the Selenium Grid is used?

With Selenium Grid you can create a simple infrastructure of various browsers on different operating systems to not only distribute test load, but also give you a diversity of browsers to work with.

The Selenium Grid is used because of many reasons. Here are a few

You can use RemoteWebDriver the same way you would use WebDriver locally. The primary difference is that RemoteWebDriver needs to be configured so that it can run your tests on a separate machine. The RemoteWebDriver is composed of two pieces: a client and a server. The client is your WebDriver test and the server is simply a Java servlet, which can be hosted in any modern JEE app server. 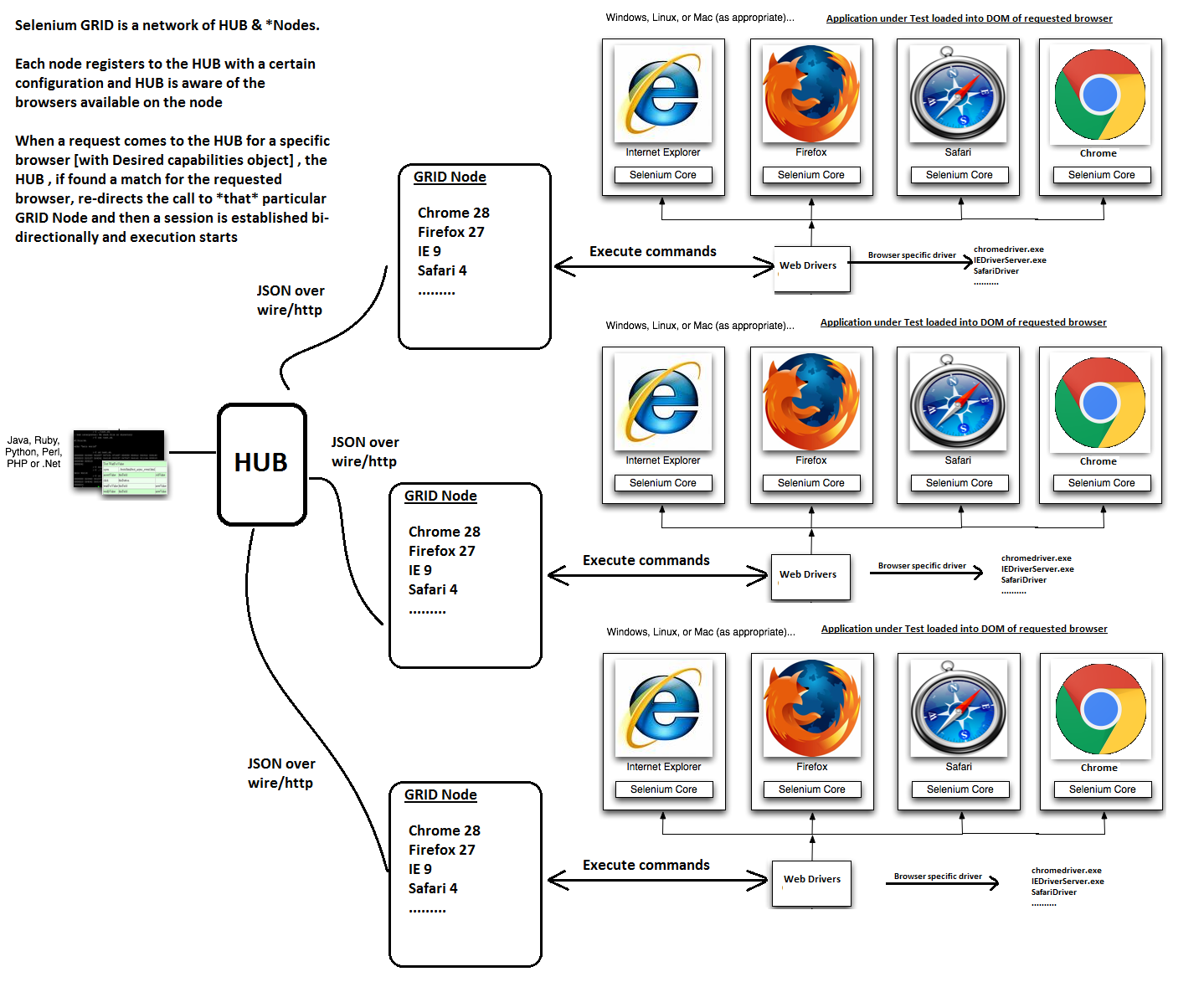 We will do this step by step as we move in this tutorial, but first let’s look at the overall architecture diagram as to how the workflow happens. Some jargon below.

For more updates on Selenium Tutorial, please Subscribe to our Newsletter.